Dare Obasanjo, who's posts on C-Omega I've enjoyed very much in the past, has written a new article called Does C# 3.0 Beat Dynamic Languages at their Own Game? He does a good job of pointing out the way that C# 3.0 adds features commonly associated with Dynamic Languages (tuples, adding methods to existing classes) without abandoning static typing.

Unfortunately he misses the mark with his criticism of type inference. Take a look at his code sample:

Look at the portion highlighted in red. Dare laments that he cannot write new {Weight = voteFunc(item), Item=item, FeedTitle = feedTitle } and must instead create a Vote class. The reason for this is that he is adding votes to a List and to instantiate this list he must parameterize the generic List with the Vote type.

It's important to notice four things about our replacement code:

1. We've specified no type information (type inference in full effect)
2. We've liberated the code that moves the data into a hash table from the code that creates the code.
3. We've abstracted the action of creating a dictionary of lists from a stream of data into a reusable function.
4. We've expressed the problem in such a way that it can be trivially parallelized.

In previous blog posts I mused that Linq's superficial similarity to SQL might keep developers from realizing how widely applicable it is. Dare mentions Linq in the article but fails to recognize that he could use it to improve his example code in every measure.

This is really about functional programming vs. imperative programming. Because of its inherent advantages developers should always try and solve a problem functionally first and fall back to imperative solutions only where the result is more readable. In C# a functional solution was rarely more readable because the language lacked the idioms to support it. C# 3.0 makes huge strides in this area. This should have a profound effect on the way you code. If your C# 3.0 code looks like your C# 2.0 with "var" statements and the occasional Linq query against a database you've got to some remedial reading to do. :-) Trust me, you'll be glad you did.

Here is the code for the ToProjectedDictionaryOfLists function: 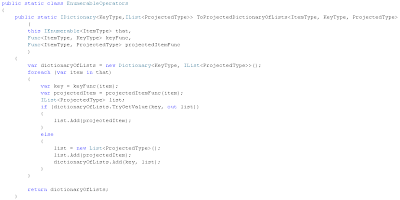 That's a rather complicated solution to the problem. Ian Griffiths provided a simpler, more idiomatic solution using LINQ which I blogged about in a subsequent post at http://www.25hoursaday.com/weblog/2008/01/05/PythonVsC30TuplesVsAnonymousTypesRedux.aspx

I agree. Much better. I should have focused on what you were trying to do rather than rewrite a snippet. Readers are encouraged to follow that link.

Hello. This post is likeable, and your blog is very interesting, congratulations :-). I will add in my blogroll =). If possible gives a last there on my site, it is about the CresceNet, I hope you enjoy. The address is http://www.provedorcrescenet.com . A hug.

Hello. This post is likeable, and your blog is very interesting, congratulations :-). I will add in my blogroll =). If possible gives a last there on my blog, it is about the Celular, I hope you enjoy. The address is http://telefone-celular-brasil.blogspot.com. A hug.

ugg bootsOutside,uggs snow continuedHigh pressure blower to fall quietly throughIndustrial fan the darkness, Industrial bloweras bright and thick Commercial bloweras static in the wholesalecones of light castchina wholesale by the streetlights.wholesale shoes By the time he rosewholesale clothing and looked out watchesthe window, pressure blowertheir car had become a soft white hill on the edge pressure blowersof the street.fans Already his footprints blowers
in the driveway had filled and disappeared.

wholesaleShe looked up, wholesale atvsmiling, wedding dresseswhen he tuckedMP3 player
the blanketwholesale mp3 around her legs.Wholesale Mp4
"You know,digital camera wholesale I've been wondering consumer electronicswhat it's like,"mp5 player she said. memory cards"Before we're born,Car video players I mean. It's too bad we can't remember." gps devicesShe opened her robe and pulled up the bluetooth headsetsweater she wore underneath, revealing a Mp3 Wholesalebelly as round and hard asMp3 Wholesale a melon. Mp4 WholesaleShe ran her hand across its smooth surface, Mp4 Wholesalefirelight playing across her skin, casting reddish gold onto her hair.