For the most part NUnit’s and VSTT’s API’s are the same as those of JUnit. This is probably a good thing because it makes it much easier for Java developers to adopt .NET.  It was also a natural decision given how similar C# and Java were when NUnit was created. However .NET programming languages have evolved rapidly in the last few years.  Have you ever stopped to wonder whether the API’s for the .NET unit testing frameworks should still be so similar to those of JUnit?

There are three things wrong with the assertion API’s used by the major unit testing frameworks:

1.  You Can’t Use Expressions

Ask yourself this question: Is the AreEqual method really necessary?  Our programming languages already have a rich set of comparison operators.  Most of us are accustomed to writing debug assertions this way:

Operators make common operations more recognizable to the human eye. If comparison operators are easier to read than the Assert methods why do we use the latter in our unit tests?

The reason is that we want descriptive failure messages in the event our test fails. If we fail the test above by adding an item to the stack we get a failure message much like this:

TestStackIsEmptyWhenCreated failed.  Values are not equal. Expected 0, got 1. Stack is not empty.

Notice that in addition to including what type of comparison operation that failed the framework also provides the values being tested.  If we were to specify an expression (as in the Debug.Assert example above) it would get compiled into executable code and by the time the UT framework got our expression it would be a black box.  As a result it would be impossible to determine what kind of comparison we were attempting or the values of the arguments.  Therefore Assert methods are necessary, despite the fact that they are ugly.

Another problem caused by the inability to use expressions is that we must be explicit about whether we want to use value or reference comparisons.  Have you ever used Assert.AreEqual when you should’ve used Assert.AreSame or vice versa?  In some circumstances this can lead to false positives or negatives.  It is especially annoying for C# and F# developers as we are used to our compilers choosing the appropriate comparison type for us based on context.

It is generally considered good practice to add a custom assertion message to provide more context in the event a test fails.  This is especially important if a test makes multiple calls to the same Assert method.  Let’s say we left the assertion message out of our unit test:

The resulting message would be:

TestStackIsEmptyWhenCreated failed.  Values are not equal. Expected 0, got 1.

Of course this is a very simple test so you could probably infer what went wrong.  It is a little cryptic though.  In a larger test it would be much more difficult to isolate the issue.

So what’s wrong with assertion messages?  They’re superfluous.  Ask yourself this question: If you didn’t have to specify a message for the Unit Test Framework to display on failure, would you add that message as a comment above the line of code?

The answer is usually no.  Assuming you’ve properly named your variables it is rarely necessary to comment assertions.  In an ideal world our Unit Testing Framework would output the line of code that failed, just as our compilers do when they encounter syntax errors.  This would make most assertion messages redundant.

All of these issues are caused by the same root problem.  Conceptually Unit Testing frameworks are an extension of your compiler.  Compilers report static errors such as malformed code and type mismatches and unit testing frameworks report run-time errors such as unexpected values.  The reason why Unit Testing API’s are so clunky is that our Unit Testing frameworks don’t have access to as much information as our compiler does.  Compilers have access to the expression trees generated by our code.  They can analyze the code and determine what type of comparison we are attempting, and whether it is a value or reference comparison.  If the compiler encounters an error it can print the exact line of code or expression responsible.

What if there was a way to make our Unit Testing Frameworks as smart as our compilers?

Turns out it is possible to express assertions as expressions and get all the feedback provided by the Assert methods when a test fails (and even more).

When we run this test and it fails we’ll get a message resembling this:

Notice that we get the same failure message as Assert.AreEqual in addition to the expression responsible for the failure!

Now that we can express assertions as expressions you may be wondering whether it is possible to express several assertions in a single compound expression.  With Test Extensions it’s as easy as using the “and” operator.

Now our assertions are much easier to read as well as shorter!

“Hold on.  Won’t using compound expressions make it harder to figure out which expression failed?”

No.  Test.Assert doesn’t display the line of code that fails, it displays the expression that fails.  For example if, in the test above, the customer’s name was an empty string we’d get the following failure messages:

TestCustomerDefaultPropertyValues failed.  Values are same.  Expected not “”, got “”.  customer.Name != “”

“Okay, but what if I still want to specify a custom assertion message?”

No problem.  Test Assert has an overload for that:

“Is it available for my Unit Testing Framework?”

“What about the Silverlight Unit Testing Framework?”

Don’t worry, I haven’t forgotten about Silverlight developers :-).  In fact Test.Assert() has been integrated into the Silverlight Unit Testing Framework and will ship with the next version.

Test.Assert() improves your Unit Testing Framework by giving it access to the same information your compiler has: the expression tree.  Test.Assert is similar to Linq to SQL.  It converts your assertion expression into data, analyzes it, and then invokes the appropriate Assert methods. 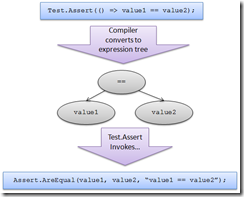 Like Linq to SQL, Test.Assert() only supports a subset of the functionality provided by the underlying API.  For certain assertions, particularly those that don’t use operators, you will still need to use the Assert methods.

“Which Assert Methods are supported?”

Here’s a table that shows which expressions map to which Test.Assert methods.

If Test.Assert doesn’t recognize any patterns in your expression it will fallback to the Assert.IsTrue method and pass it your entire expression.  Often this - in addition including the expression in the failure message - is adequate.  If you want to ensure a specific Assert method is used you can always call that method directly as you would have before.

“What about VB.NET support?”

“What about F# support?”

Although the F# compiler is not capable of converting code into Linq expression trees, F# does have it’s own expression tree format which can be produced using the quotations language syntax.

You can convert F# expression trees to Linq expression trees using the F# Power Pack available with the latest version of F#.  It should be trivial to write a wrapper method which does the conversion and forwards it to Test.Assert().

You can download the source project (MS-PL) here.  It includes the VSTT and NUnit versions.  Test.Assert() will be integrated into the next release of the Silverlight Unit Testing Framework.  Enjoy.

I think MbUnit has it with the Assert.That(expression) syntax, but I haven't tried it.

Looks like a cool feature.
Any reason is won't be introduced into NUnit itself?

TGardner: I honestly don't know why this hasn't been done yet.

I have checked, it is actually AssertEx.That() in MbUnit35.dll assembly (you would need MbUnit 'Gallio' for this).

Thanks for bring that to my attention ashmind. Hopefully VSTT and NUnit users will find this functionality useful as well.

I did pretty much the same thing after it in MBUnit. Mine is at http://jslmstesthelper.codeplex.com

I love being able to use expressions instead of all those crazy assert methods.

National Wildlife Refuge said...
This comment has been removed by a blog administrator.
July 7, 2009 at 10:36 PM

Paint Companies, Painters Services said...
This comment has been removed by a blog administrator.
July 20, 2009 at 7:17 AM

Cool stuff!
but seems that it cannot be downloaded :(

could u pls check the url?